International
Register
Back to top

1889
"Le Figaro" sets up a printing press on the 2nd floor and produces its daily paper on site. Visitors buying their newspaper can have their name inscribed on their copy to "certify" that they climbed the Tower.
On September 11, Gustave Eiffel welcomes Thomas Edison and his phonographs on the 1st floor. The men dine together.

1901
On several occasions Santos-Dumont sets off from Saint-Cloud, just to the west of Paris, in his dirigible and flies past the Eiffel tower to win a prize.

1905
"Le Sport" organizes a championship race up the stairs to the 1st floor, won by Forestier in 3 minutes, 12 seconds. The prize: a bike.

1909
On October 18, the Count of Lambert flies over Paris and around the Eiffel tower for the first time in the history of aviation. His aircraft is a "Wright", made of wood and canvas.
In Eiffel’s aerodynamics laboratory at the foot of the tower, the first research is carried out on the plane wing sections used by Wright, Voisin and Farmann, using the vertical drop from the 2nd floor.

1912
"Birdman", one Reichelt, a tailor based in Longjumeau, throws himself off the 1st floor with his handmade parachute and crashes to the ground at the feet of the press.
An aviation enthusiast, Gustave Eiffel builds the first return flow wind tunnel, as a result of numerous plans and drawings. The "Engineer of the Universe" conducted over 5,000 experiments on the resistance of wings and propellers to air.

1923
The journalist Pierre Labric, future Mayor of Montmartre, cycles from the first floor down to the ground on his bike, and without authorization. The descent was given substantial coverage. The cup won by the "hero" is currently to be found in the cellars of the Eiffel Tower.

1926
The aviator Léon Collot is killed flying under the Eiffel Tower. Blinded by the sun, he hits the television antennas.

1934
Jacopozzi installs a clock and a thermometer along the tower. Red lamps represent mercury.

1939
For the Tower’s 50th anniversary, high mass is celebrated on the 1st floor in the presence of the Archbishop of Paris, Mgr. Chaptal.

1944
On August 24th, a three-colored flag, the symbol of liberated Paris, is raised to the top of the tower. The flag is made from three bedsheets sewn together.

1948
Bouglione, of the eponymous circus, takes one his "inmates" for a little promenade. At 85, the oldest elephant in the world cannot make it further than the first floor.

1964
To celebrate the Tower’s 75th anniversary, mountaineers Guido Magnone and René Desmaison climb the Tower, and the event is broadcast by Eurovision.

1983
Charles Coutard and Joël Descuns ride up and down the Tower on their motocross bikes.
An international auction is held in the Gustave Eiffel room on the first floor to sell parts of the spiral staircase that linked the 2nd and 3rd floors – with 12 television channels attending.

1989
For the centenary of the Eiffel Tower, the tightrope walker Philippe Petit "walks" across the 700 meters that separate the Palais de Chaillot from the Tower.

1995
Triathlete Yves Lossouarn breaks the record for climbing the Tower stairs on foot in 8 minutes and 51 seconds. Seventy-five athletes take part in the race, organized for a special Arte television evening.

1997
A professional British stuntman parachute-jumps from the 1st floor of the Eiffel Tower.
12th World Youth Days: the Pope pays a tribute to the Eiffel Tower in front of 300,000 pilgrims gathered on the Champ de Mars to meditate.
To celebrate Halloween, an extraordinary vegetable garden containing 85 tonnes of pumpkins is installed in the Trocadéro gardens.

1998
Hugues Richard breaks the record for climbing the Eiffel Tower stairs from the ground floor to the 2nd floor on a mountain-bike.
For the Football World Cup, nearly 700 journalists and 120 television stations from all over the world are welcomed to the Eiffel Tower, in the reception pavilion set up for the occasion on the ground floor. Throughout the World Cup, a camera set up on the roof of the Unesco building films the Eiffel Tower around the clock. The footage is used as the reference for televisions the world over.
The "Three Tenors" concert at the foot of the Eiffel tower: José Carreras, Placido Domingo and Luciano Pavarotti sing on the Champ de Mars for an audience of 200,000 people, with the illuminated Eiffel Tower as a backdrop.

1999
A golf tournament is held in Paris for the first time with the 1st and last hole under the Eiffel Tower.

2000
As part of the Firemen’s World Games, the most prestigious competition – climbing stairs from the ground to the 1st floor of the building – is held at the Eiffel Tower.
The Eiffel Tower is decked out for the Europe Days on May 9. European flags are raised on the1st floor, on the gallery roof.
The set of a French fund-raising telethon is installed on the Champ de Mars. The Eiffel Tower is in the background throughout the many hours during which the program is broadcast live on the France 2 channel.
The Orchestre de Paris and the Boston Symphonic Orchestra conducted by Seiji Ozawa give a free concert on the Champ de Mars in front of the Eiffel Tower, which is illuminated for the occasion.
Johnny Hallyday gives a free concert at the foot of the Eiffel Tower for an audience of 600,000 people. Pyrotechnics and a light show enhance the Tower for the occasion.

2001
The Spaniard Aitor Sarasua Zumeta smashes the record previously set by Hugues Richard for climbing the tower on a mountain-bike.
As part of an exhibition on the Champ de Mars organized by the French land army, 10 climbers of the Paris Fire Brigade climb up to the second floor of the Eiffel Tower and abseil down from the first floor.

2002
Hugues Richard breaks his own record in 1998 of climbing the Tower on his mountain-bike.
The Eiffel Tower participates in the first "Nuit Blanche" organized by Paris City Hall on October 5. Sophie Calle, at the top of the monument all night, welcomes visitors who come to tell her stories. The Eiffel Tower welcomes 18,425 people between 6 pm and 7 am.
The Tower welcomes its 200 millionth visitor since it opened in 1889. To celebrate the event, an exceptional evening is organized on the1st floor. All the tourism professionals and partners who contributed to the success are invited, and more than 1,200 of them accept.
An immense heart made from 5,000 vine stocks painted pink is placed at the foot of the Eiffel Tower. The event is held in aid of the people affected by the explosion at the AZF plant in Toulouse in September 2001.

2003
The Eiffel Tower is decked out in colors representing Paris’s candidature to host the Olympic Games of 2012.
The First International Meetings for Defense are held on the Champ de Mars. The Paris Fire Brigade puts on a show around the Eiffel tower by abseiling from the1st floor.
Centenary of the Tour de France: the prologue departs from the foot of the Eiffel Tower.
For the end-of-year festivities, a forest of fir trees is planted under the Eiffel Tower. A giant hopscotch game is installed on the1st floor.

2004
The VTT champion, Xavier Casas from Andorra, beats his own record for climbing the steps on a VTT:  1,300 steps! He obtained an entry in the Guinness Book of World Records for this feat.
French champion ice skaters, Sarah Abitbol & Stéphane Bernadis, inaugurate the 200 square meter skating rink installed on the 1st floor of the tower. A real success, the rink welcomed more than a thousand skaters each day.

2005
On May 18th, the athlete Jerome Sue descended the 345 steps from the 1st floor to the ground floor in a wheel chair.

2006
A roller skating rink was set up on the 1st floor from November 18th to 20th. Taïg Khris, twice world champion in the sport, amazed the amateurs with his demonstrations.
Yoggi, young French champion of the monocycle, went up the stairs to the second floor in 22 minutes without setting foot on the ground.

2007
From June 1st to 10th, the Tower welcomed an under-water diving pool 240 square meters in size installed at the foot of the tower allowing 3,000 visitors to get a scuba diving initiation.
At the end of the year, visitors were able to put on snowshoes and follow a 300-meter trail of snow around the first floor of the monument. For this celebration of the Polar Year, a special icy bar opened and a 6-meter ice model of the Eiffel Tower decorated the first floor.

2010
May 29th, the roller skating champion Taig Khris beats the world record jump from a platform located at the 1st floor of the Eiffel Tower with a 12.5 meters free fall jump. 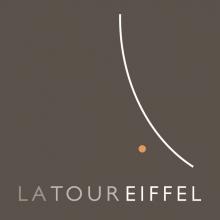